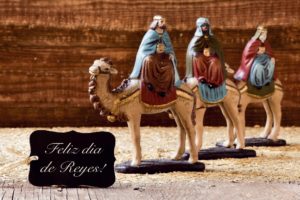 Three Kings Day is celebrated throughout Latin America and Spain as an occasion for gift-giving!

In the English-speaking world, the Christmas and holiday season tends to end with the celebration of New Year’s Day. However, for those in Spanish-speaking countries, the holiday festivities extend all the way to today – January 6th! Christians celebrate this day as the Epiphany – the day the three wise men found the newborn Jesus Christ after following a star through the desert for 12 days after his birth. While this day isn’t quite as important for English-speaking Christians, for those in Spain and Latin America it is a very important date marked with celebrations. Let’s take a closer look at the holiday being celebrated throughout Latin America and by Spanish-speaking Americans known as El Dia de los Reyes or Three Kings Day!

Every Western culture has a tradition of gift-giving during the Christmas season that dates back to ancient times. In the United States, the origins of Santa Claus can be traced back to the real-life Saint Nicholas, who was born around 280 AD in Asia Minor (modern Turkey). For those in Spanish-speaking countries, the three wise men (Caspar, Melchior, and Balthasar) are traditionally associated with gift-giving – as befits their story of giving the baby Jesus gifts of gold, frankincense, and myrrh. The holiday itself dates back to the 4th century and became especially prominent in the Roman province of Hispania (modern-day Spain and Portugal). From here, the traditions of this holiday spread with New World colonists to Mexico, Central America, and South America.

Just as with Christmas, there is a heavy emphasis on gift-giving on Three Kings Day. Children all over the Spanish-speaking world leave their shoes by the door of their homes the night before Three Kings Day so that the kings will come and leave them presents. In the same way as families leave milk and cookies for Santa Claus, families will often leave salt and grass alongside the shoes – these are meant for the camels that the three kings are said to ride on. Parades and parties are commonplace. In Mexico and among Mexican families in the US, another tradition revolves around the baking and eating of a special treat known as rosca de reyes, or Three Kings bread. This is a sweet bread that contains a baby Jesus doll hidden within. It is said that if you are the one who ends up with the baby Jesus doll on Three Kings Day, you’re obligated to host a party for the subsequent holiday Dia de la Condelaria (Candlemas Day), which occurs on February 2nd!

Categories: Central America, South America, and Spain | Tags: christmas season, epiphany, latin america, and three kings day
This entry was posted on Wednesday, January 6th, 2021 at 10:31 am . You can follow any responses to this entry through the RSS 2.0 feed. Both comments and pings are currently closed.