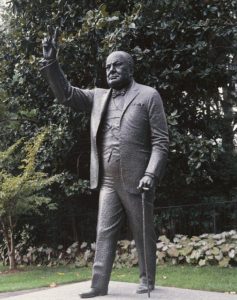 Winston Churchill is arguably the most famous prime minister of the United Kingdom. Among his many accomplishments, as an officer in the British army, a Nobel Prize-winning writer (1953), and a historian, he is perhaps most well-known for his instrumental role in leading the British people to victory in World War II. Churchill’s philosophies and inner strength during one of the worst times in history have inspired generations. People around the world still visit the famous Churchill war rooms that are a part of the London branch of the Imperial War Museum.

About The Imperial War Museums

The Imperial War Museums are a group of five museums located throughout the United Kingdom that commemorate important moments in Britain’s history and warfare. When Britain first declared war on Germany during World War II, Churchill was re-appointed First Lord of the Admiralty, which was a key position as a military leader, before he was later made prime minister. Through this opportunity, Churchill was instrumental in helping assemble the allied powers, especially the United States, while also motivating the apprehensive United Kingdom to take their crucial position in the war. Because of Churchill’s pivotal role in the British victory, his legacy is prominently featured throughout much of the Imperial War Museums.

The Cabinet War rooms were an underground command center that was built beneath Westminster during 1938 and 1939, at the beginning of the war in Europe. Originally, the Cabinet War Rooms were made as an alternative to evacuating the prime minister and other prominent figures from London, so that the people would not feel abandoned if there was an enemy strike. Throughout World War II the basement offices of the Cabinet War Rooms were a center for military strategy. These rooms consisted of several meeting places for the British War Cabinet, most notably the Map Room, where important developments about the war were discussed and exchanged. In particular, Churchill held 115 meetings. The Cabinet War Rooms have been preserved as a historical site that people can visit. Later in 2005, the Churchill Museum was added to the Cabinet War Rooms so that people could learn more about the life and career of Churchill while visiting this important part of history.

Experience an exhilarating adventure on the Exotic Egypt tour, the Iceland Airwaves tours, and more!

Categories: England | Tags: AESU Europe, AESU World Travel, england, UK, and world travel
This entry was posted on Wednesday, May 27th, 2020 at 10:53 am . You can follow any responses to this entry through the RSS 2.0 feed. Both comments and pings are currently closed.