Pardon our play on words, but Vincent’s work is indeed vintage as he’s celebrating his 163rd birthday on March 30th! In fact, the last known work before his death, Wheat Field with Crows completed in July of 1890 is nearly 126 years old alone.

While today we widely recognize van Gogh for his incredible contributions to art, he was sadly not as well-received during his short 37 years of life. It all begins with his birth in Groot-Zundert, Netherlands. 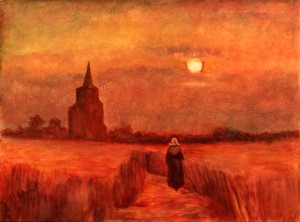 Vincent van Gogh painted “Old Tower in the Fields” in July, 1884, and was done in the Netherlands.

The life of van Gogh

Interestingly enough, Vincent was not the first Vincent van Gogh. Exactly one year before the Vincent we know was born, he had a stillborn brother of the same name. Due to the date of birth and name being the same, he was forced to see his own name and birthday on his deceased sibling’s headstone. Understandably, this didn’t give him the happiest of starts in life.

Vincent’s first job was at the age of 15 for his uncle’s art dealership, to help his family financially. This, and his mother’s love for art, was a huge influence on the beginning of his artistic career. In 1873, he began working for London’s Groupil Gallery, where he began to deeply admire English culture. But after his love refused his marriage proposal, he gave up his love of art for a short time to teach at a Methodist boys’ school.

It wasn’t until 1880 that van Gogh decided to pursue an official career in art, which turned out to be a very short career given his death was in July of 1890.

Even though he was only painting for 10 years, Van Gogh created some wonderful masterpieces in this short time. In this timespan, he created famous works you are probably familiar with, such as: Irises, Sunflowers, Poppies, Starry Night, The Bedroom, The Night Café, The Potato Eaters, Blossoming Almond Tree, and The Mulberry Tree.

However, during his lifetime, he was never recognized as a great artist. But just one year after his death, in March of 1901, over 70 of his pieces were displayed in a Paris art show which catalyzed his global recognition as a prolific artist.

So this is to you, Vincent van Gogh, for the beautiful artwork you’ve given decades of people all over the world to admire long after your death!

Travel to the Netherlands and see the Vincent van Gogh Art Museum in person!

AESU offers several trips to the Netherlands, including: Euro Explorer. Explore the Netherlands and its spectacular landscapes, plus see Amsterdam and visit the Vincent van Gogh art museum!

If you have any questions or want help booking your Netherlands adventure, please contact AESU by calling 800-638-7640, or fill out the contact form found on our website!

Categories: Europe | Tags: artists and netherlands
This entry was posted on Wednesday, March 30th, 2016 at 11:00 am . You can follow any responses to this entry through the RSS 2.0 feed. Both comments and pings are currently closed.