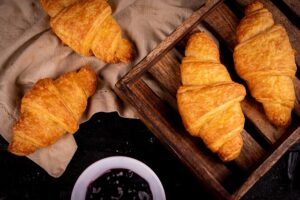 Do the culinary wonders of France have a spot on your itinerary? Whether you’re exploring the French countryside or the City of Light, treat yourself to some of these French pastries!

With patisseries and cafes seemingly everywhere, you’re never too far away from a tasty French pastry when traveling in France! Pastries have been a part of French food culture for centuries and many of the most famous varieties have become staples of bakeries around the world. Whether you’re exploring the City of Light, the French Riviera, or a charming hamlet out in the countryside, you owe it to yourself to seek out and experience the wonder of French pastries firsthand!

Originally invented in Vienna, croissants became synonymous with French baking culture soon after their introduction to the region. Consisting of a simple recipe of yeast-leavened dough with butter, the dough is then rolled and folded several times before being rolled into a thin sheet. This creates the layered, flaky texture that the croissant is famed for. The croissant’s place as part of a continental European breakfast was established by 1869 – make sure to enjoy one with your morning cup of coffee at the café!

The original French word éclair means “flash of lighting”, and it is said that the éclair pastry was so named for the speed at which you eat it! The éclair is an oblong pastry that is made with choux dough, filled with a flavored cream, and topped with chocolate. Also originating in the 19th century, the éclair is a great dessert option after a light meal at the local bistro!

The macaron was introduced to France during the Renaissance period by the chef of queen Catherine de Medici. Despite its foreign origins, macarons eventually became synonymous with French pastry baking just like croissants. Characterized by its smooth top, ruffles around the edges, and filling, you can find macarons of all kinds in France today. Traditional fillings such as chocolate and raspberry are ubiquitous, but you can also find more exotic macarons such as ones filled with foie gras or matcha in specialty shops in Paris.

Invented in the Lorraine region of France, the madeleine is recognizable by its shell-like bulge on top of the cake. It is a type of sponge cake that is baked in a special pan. Traditionally, the recipes used to make these pastries include ground almonds, and some even include lemon zest for a distinct citrus flavor.

Categories: France | Tags: croissants, cuisine, france, French Food, and French pastries
This entry was posted on Wednesday, August 18th, 2021 at 11:08 am . You can follow any responses to this entry through the RSS 2.0 feed. Both comments and pings are currently closed.