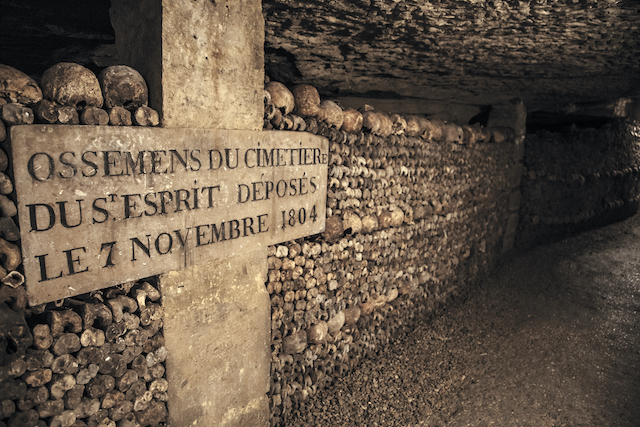 The Paris Catacombs, which constitutes one of the largest transfers of human remains in history, is a fascinating site to visit.

Paris has been known as the City of Light for a long time. However, for a time in the mid 1700s, it was also known for its unfortunate stench. By this point, the city had grown at such a rapid pace that the cemeteries couldn’t keep up. The largest cemetery in the city, the cemetery of the Innocents, alone had around 2 million bodies interred. Officials in the city came up with a plan to preserve the public health of the living – they built the Paris Catacombs, which constitutes one of the largest transfers of human remains in history. However, there are a number of tall tales that have sprung up since the establishment of the Catacombs – some of which even have a grain of truth!

The Tunnels Supported the City Foundations

The Paris Catacombs were built into a web of tunnels over 200 miles long that were said to have provided the foundations of the city. This is, in fact, true. Before work on the Catacombs began in earnest, the King’s Architect, Charles-Axel Guillaumot was given the task of reinforcing and stabilizing the entire network. It was getting so bad that some of the city’s buildings were actually starting to collapse into giant sinkholes. Guillaumot accomplished this task with relative ease, and by 1785 the remains of dead Parisians were being transferred to the Catacombs. They were accompanied by a Catholic priest who chanted the Office of the Dead prayer cycle, so as to not disturb the remains.

The Catacombs Were Designed to Attract Tourists

This is also true – Napoleon himself commissioned government officials to turn the Catacombs into something that would bring in tourists to the city. The quarrymen who worked on the job took the remains, which were to that point simply placed willy-nilly in the tunnels, and placed them deliberately in various shapes. Some of the designers used the opportunity to convey deeper messages about the meaning of death. They also carved arrows into the ceilings so that visitors wouldn’t get lost (although, famously, that didn’t stop a group of English tourists from getting lost in 1903).

There was a persistent, salacious rumor through the years that the former king, Charles X, used to hold parties in the Catacombs. No one knows for sure if that’s true, but there was an illegal concert that was put on by an amateur group on April 2, 1897. Around 100 audience members took in performances of music that was thematically relevant to the setting – Chopin’s Funeral March and Camille Saint-Saens’ Danse Macabre were highlights.

The Mysterious Disappearance of Skulls from the Catacombs

During your visit to the Paris Catacombs, you may notice holes in the alcoves where skulls used to be. The influx of visitors to the tourist site began to result in skulls mysteriously going missing. Stories abound, but the likely reason is that unscrupulous visitors took them home as a souvenir from their trip. At first, the workers here replaced missing skulls, but after a while they just stopped.

Categories: France | Tags: france, paris, and Paris Catacombs
This entry was posted on Wednesday, October 5th, 2022 at 11:08 am . You can follow any responses to this entry through the RSS 2.0 feed. Both comments and pings are currently closed.