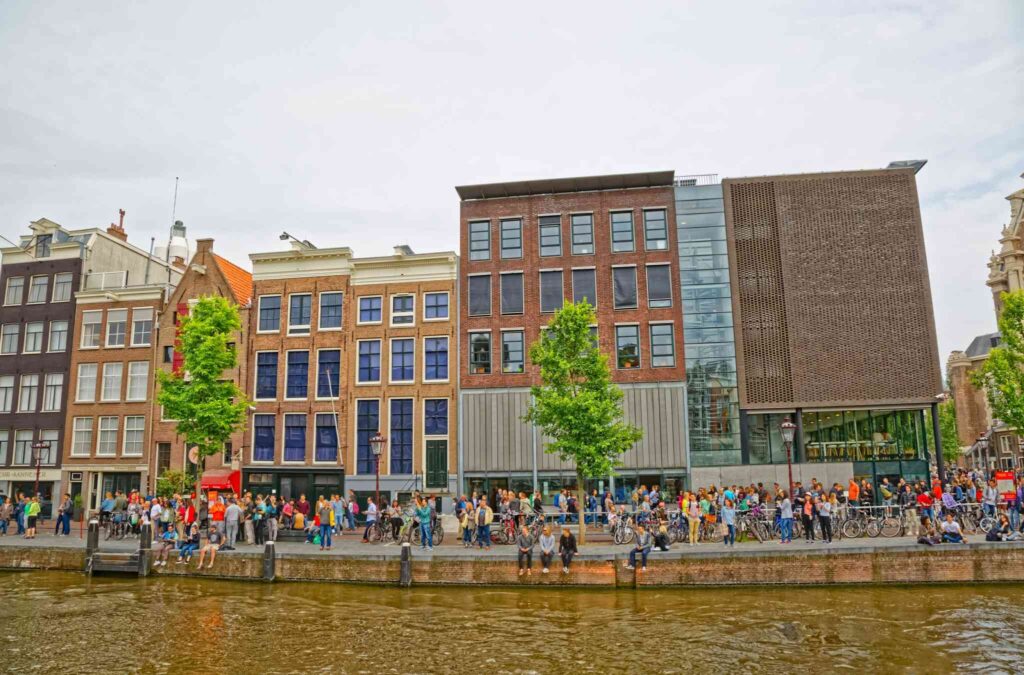 Amsterdam’s Anne Frank House is a repository of history from one of Europe’s darkest hours.

The Diary of Anne Frank is one of the most well-known pieces of literature from the World War II era. This book, documenting the personal life of a Jewish girl hiding from the Nazis in a concealed space behind a bookcase in an Amsterdam office, has been read by millions of people and the tragic fate of the young girl has led to a greater awareness of the horrors perpetrated by the Germans in the periods before and during World War II. For travelers seeking to learn more about this unique young girl, and gain more insight into the atrocities committed by the Nazi regime in Europe, the Anne Frank House is a must-visit. Located in the heart of Amsterdam, this canal-side house was the setting for the dramatic scenes that played out in Anne Frank’s diary and is now dedicated to the preservation of both the space as well as the memory of all those who were persecuted by the Nazis.

History of the House

The Anne Frank House was originally built in the early 17th century as a private residence. During its lifetime, it evolved into a warehouse and also functioned as a horse stable in the nineteenth century. By the early 20th century, the space was used by an appliance manufacturer as well as a piano roll producer. When Otto Frank, Anne’s father, looked at the space, it had been vacated. Otto decided to move the offices of Opekta and Pectacon, spice and gelling companies that he worked for, to this space on December 1, 1940.

The key piece of this property is the secret annex in the rear of the home. This is where Anne, her family, and four other Jews took refuge in hiding from the Nazis from 1942 until they were discovered in 1944. The annex was hidden from view on all four sides thanks to other houses that surrounded it. Anne and her family were discovered during a Nazi raid of the premises on August 4, 1944, and were immediately deported to the Auschwitz concentration camp. Anne and her sister were split from the rest of the family and forwarded to Bergen-Belsen, where they both passed away, likely from a typhus epidemic that ran through the camp.

After the war, developers wished to demolish the block to redevelop the space. The Anne Frank Foundation was established to protect this space and turn it into an international museum, which they succeeded in doing with the opening of the Anne Frank House to the public on May 3, 1960.

The Anne Frank House is open to visitors seven days a week from 9:30 am to 4:30 pm Monday-Friday and 9:00 am to 7:00 pm Saturday and Sunday, with hours being adjusted during the summer and other periods of the year. The museum is fully reliant on private donations and entrance fees to cover its operating costs – the entrance fee is 14 Euro for adults, 7 Euro for children aged 10-17, and 1 Euro for children up to 9 years of age. Audio guided tours of the space are free and can be reserved at the counter. Book your tickets online at the official Anne Frank House website – while it is possible to purchase a ticket at the counter, you may run the risk of the day being sold out.

The Anne Frank House is located near the center of the city of Amsterdam at Prinsengracht 263-267, with the entrance located around the corner at Westermarkt 20. To get there, you can go to Amsterdam Central Station and take a 20-minute walk through central Amsterdam to the house, or take tram 13 or 17 to the Westermarkt stop.

Categories: Holland | Tags: amsterdam, Anne Frank House, and the netherlands
This entry was posted on Wednesday, February 24th, 2021 at 10:21 am . You can follow any responses to this entry through the RSS 2.0 feed. Both comments and pings are currently closed.