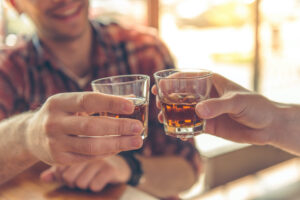 Irish whiskey has been recognized around the world for its quality.

According to historians, whiskey production in Ireland dates back to at least the 12th century CE, when the distillation process was brought up from southern Europe. Since then, Irish whiskey has been recognized around the world for its quality. Irish whiskey production was completely controlled by one company in 1972, but since then, efforts have been made to encourage new distillery start-ups. As of 2019, Ireland is home to 32 operating distilleries, with more planned or under construction. This is great news, seeing as Irish whiskey is one of the fastest growing spirits in the world! If you visit the Emerald Isle, it’s absolutely worth it to go out and explore some of these distilleries for yourself! Here are some of the best ones to see.

Jameson is the most well-known Irish whiskey brand in the world. When it was founded by John Jameson in 1780, it was produced at a distillery on Bow Street in Dublin. These days, most of the whiskey’s production has shifted to a facility in County Cork, but the original Bow Street location still serves as a perfect gateway to the world of Irish distilleries. You can sign up for a cocktail making class, a class on how to blend whiskies, a tasting, or even create your own bottle of Jameson whiskey straight from the barrel!

Kilbeggan Distillery was established in 1757 in County Westmeath. This whiskey had many fans throughout the years, including Winston Churchill. Production of Kilbeggan ceased in 1957 owing to financial struggles – however, the company maintained its operating license through the years, and the facility was refurbished and reopened for production in 2007. Today, it is considered one of the best distilleries to visit in the entire Republic due to its history and idyllic location.

Tullamore D.E.W. whiskey is made at the Tullamore Distillery in County Offaly. The distillery became the first new distillery constructed on a greenfield site in Ireland in over 100 years when it opened for production in 2014, and it cost 35 million Euros to complete. Visitors to the distillery will learn about the history of whiskey production in Tullamore in an old bonded warehouse and follow in the footsteps of the company’s founder, Daniel E. Williams.

Only 50 minutes by car from Dublin, the Slane Whiskey Distillery tour is unique in that it takes place in the stables of Slane Castle. It’s easy to combine a tour of the distillery with a tour of the castle itself. Slane has also been the home of several huge rock concerts over the years. It is considered off-the-radar by local whiskey enthusiasts, so take the opportunity to see it if you get a chance!

Categories: Ireland | Tags: ireland, Irish, and Irish distilleries
This entry was posted on Wednesday, January 25th, 2023 at 11:56 am . You can follow any responses to this entry through the RSS 2.0 feed. Both comments and pings are currently closed.