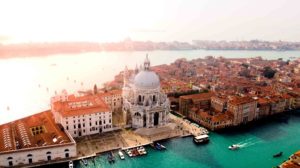 The Santa Maria della Salute welcomes visitors from the water.

In 1493, Marino Sanudo counted 137 churches spread throughout Venice and the surrounding islands. The Italian historian wasn’t far off from the contemporary census, with over 118 recorded churches on the mainland and 23 found on the Lagoon Islands. It’s remarkable to think that a city built on water could withstand so many extravagant buildings and churches, but they remain to this day as proof of humankind’s resilience and ingenuity. Spend the day in Venice with AESU, and discover the most famous churches of the region!

You don’t have to be a religious person to appreciate the intricate beauty of Saint Mark’s Basilica. Originally the chapel of the Doge, Saint Mark’s is now known as the most prominent cathedral church in Venice. Complete with gilded ground mosaics, a jewel-encrusted altar screen, and endless yards of tiny Murano glass tiles, the Basilica of Saint Mark is a sight to behold for any traveler.

Also known as the Frari, the Santa Gloriosa dei Frari, is located in the heart of the San Polo district of Venice. Don’t be fooled by this gothic church’s simple exterior. The Frari is home to several Renaissance masterpieces, including the last remaining wooden rood screen in the city. Perhaps the most striking element of the Frari is the 16th-century painting of the “Assumption of the Virgin,” which towers 24 feet above the altar!

If you’re lucky enough to enter the Piazza San Marco from the water, the dome of the Santa Maria della Salute is likely the first image you will see. The massive white stone facade features richly decorated statues, complex columns, and Baroque scrolls. One of the most important painters of the Venice Renaissance, Titian, covered the interior ceilings with bold and colorful paintings of biblical scenes. Visitors can spend the entire day admiring both the exterior and interior craftsmanship.

The Madonna dell’Orto was Tintoretto’s most beloved church, and the Italian painter filled the interior with his work. Built during the first half of the 14th century, the church hosts an impressive art collection, as well as the tomb of Tintoretto and his family. During the building of the church, an unfinished statue of the Madonna laid in the garden and was said to glow during the evening, working miracles on those who passed by!

Experience an exhilarating adventure to Italy on the Cosmopolitan, Explorer, Italian Foodie Getaway tours, and more!

Categories: Italy | Tags: italy and venice
This entry was posted on Wednesday, February 27th, 2019 at 9:31 am . You can follow any responses to this entry through the RSS 2.0 feed. You can leave a response, or trackback from your own site.