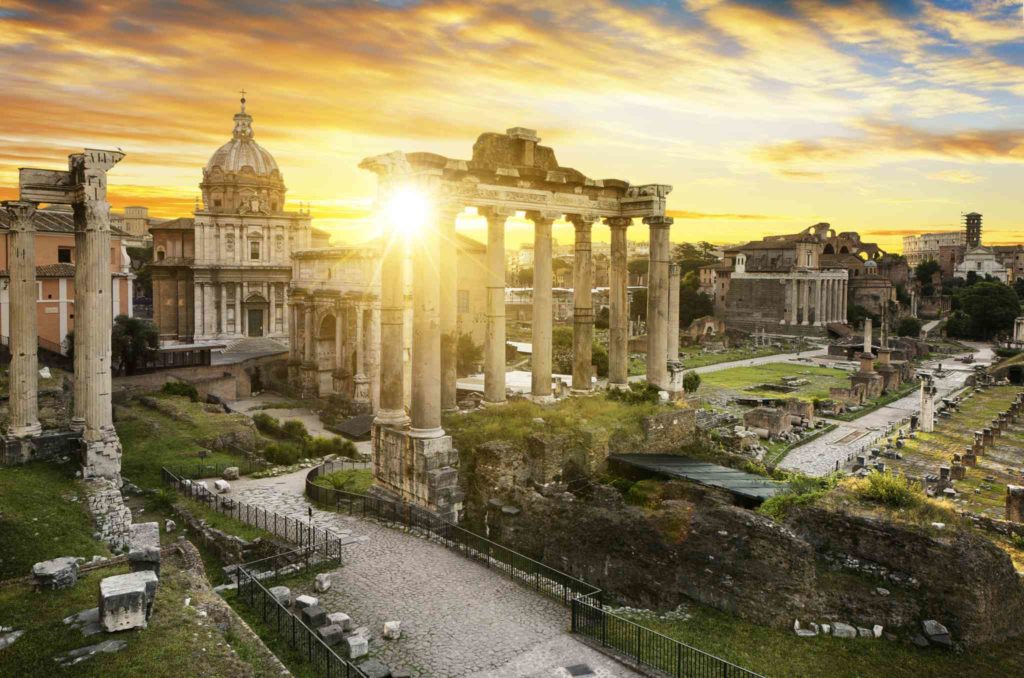 The ancient ruins of Rome are vivid reminders of the city’s glorious past as the most important place of the Western world.

Traditionally, Rome was founded in 753 BCE after the mythic brothers Romulus and Remus dueled to the death to determine the name of their new city. Since then, the city experienced its near-death at the hands of Hannibal and the Carthaginians, produced world-renowned statesmen and generals, conquered most of Europe, the Balkans, and Asia Minor, became the religious center of the Western world, fell to barbarian invasions, and reawakened as a major, modern European city. The history of Rome is preserved both in the manuscripts that have been handed down to us as well as the grand, stately pieces of architecture that survive to us in ruins throughout the city. The ancient ruins of Rome are essential for any traveler with even a passing interest in Roman history! Here are some of the best sites to check out on your next trip.

A globally recognized symbol of Rome, this massive amphitheater was constructed by Emperor Vespasian in 80 CE. This site was the home of large, deadly gladiatorial fights, some of which featured combat with animals, and seated 55,000 people, rivaling some modern sports stadiums! The intricate underground complex where combatants were held before contests can also be seen on a tour of the Colosseum. Ticket lines, predictably, can be quite long, so head to the grounds early or look for a package deal online!

Built by the emperor Hadrian in 125 CE, this temple was dedicated to all of the Roman gods and was once the site of a temple constructed by Marcus Agrippa. Hadrian chose to keep the inscription of the old temple on his new one which is why you will see Agrippa’s name on the front of the building. Inside, the standout feature is the dome, which features an opening at its height. Even to this day, the dome is the world’s largest unreinforced concrete dome. Today it serves as a Roman Catholic church, but you can get in for free!

A massive complex of temples, markets, and ceremonial arches, the Forum was the beating heart of ancient Rome and the site of some of the most famous events in its history. Cicero’s denunciation of Catiline, Antony’s funeral oration for Caesar that led to riots, and much more all took place at sites in and around the Forum. Take your time exploring everything this location has to offer!

Rome was built on seven hills, but the most famous of these is the Palatine. This was the place for Roman elites to set up their estates – and in later times, nearly all of the Roman emperors up until the sack of the city would live on the Palatine. Today you can visit the Domus Flavia and Domus Augustana on the site, each of which served as part of the official imperial estate for hundreds of years.

Looking to travel this year? We still have space available on some of our exciting journeys such as Peru’s Inca Trail, Iceland, and New Year’s Eve on Cloud 9 in Austria!

Categories: Italy | Tags: Colosseum, Forum, Pantheon, Roman ruins, and rome
This entry was posted on Wednesday, July 28th, 2021 at 10:30 am . You can follow any responses to this entry through the RSS 2.0 feed. Both comments and pings are currently closed.