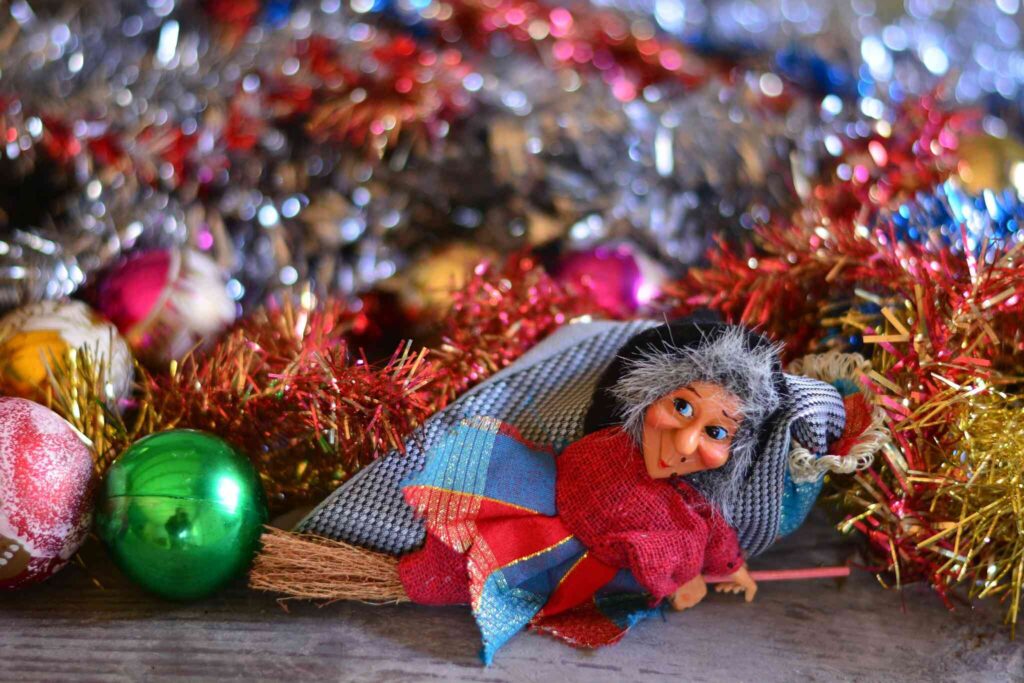 Among the variations of Santa Claus and Saint Nicholas around the world, none might be as distinctive as Italy’s Befana.

While the red-robed figure of Santa Claus seems to be everywhere during the Christmas season, he is far from the only person giving gifts to good children around the world. The American depiction of Santa Claus, which has been fairly settled since the early 20th century, is certainly one of the most visible of these benevolent people – you’ll even find him starring in TV commercials in Japan around this time. In other parts of the world, people have other traditions associated with the holiday season – they may be derived from the traditions of old St. Nick and given local flavor, or they may have their own origins entirely. Here are three variations of Santa Claus and St. Nicholas that you may encounter on your travels.

Ded Moroz is the Slavic equivalent of Santa Claus and is very influential in Russia, the former Soviet republics, and the Balkan countries. Ded Moroz, translated literally as “Grandpa Frost”, originated from earlier pagan beliefs about a snow wizard and was syncretized into the dominant Orthodox faith in Russia in the 19th century. Just like Santa, he brings presents to good boys and girls – but Ded Moroz comes on New Year’s Eve and not Christmas Eve. Typically depicted with a magic rod, the legends surrounding Ded Moroz (and his magical granddaughter Snegurochka) influenced literature and opera in Russia during its Golden Age in the 1800s.

St. Basil was one of the most important figures in early Christianity and is a foundational figure for the Greek Orthodox Church. Amazingly, he also doubles as a giver of gifts during the holiday season for children in Greece! On his feast day, January 1st, it is customary to serve a dish known in Greek as vasilopita – this is a rich bread that has a coin baked inside. This tradition originated from a story about St. Basil where he gave money to the poor by commissioning a group of women to bake bread with gold coins inside.

Italy celebrates Christmas in a way that we as Americans would recognize. However, Italian children also look forward to the coming of Befana on the night of January 5th – the night before the Epiphany. The tradition mirrors what we see in Germany and Austria on the night before the feast of St. Nicholas – children put their socks out before going to sleep, and then they wake up to find them filled with sweets and candy the next morning. Befana is an old woman who is believed to have hosted the Three Magi as they made their way to visit the infant Jesus Christ in Bethlehem. Curiously, she is portrayed as what we Americans would almost recognize as a Halloween witch – riding a broomstick, wearing a black shawl, and covered in soot (because, like Santa, she rides down the chimney to give her gifts to the children).

Categories: Greece and Italy | Tags: befana, ded moroz, santa claus, and st. basil
This entry was posted on Wednesday, December 8th, 2021 at 10:30 am . You can follow any responses to this entry through the RSS 2.0 feed. Both comments and pings are currently closed.