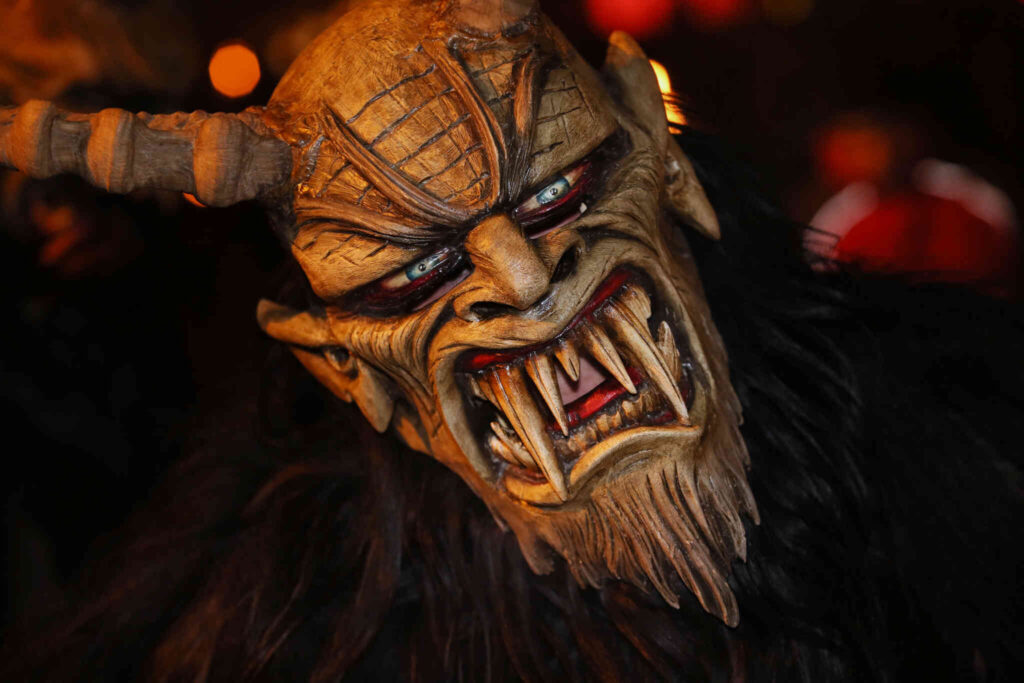 In Germany and Austria, Krampus is believed to come on the night before Saint Nicholas’s feast day to snatch and abduct evil children while they are sleeping.

The story of “Jolly Old Saint Nick” and his workshop on the North Pole has become ubiquitous all around the world. Even in some countries where Christianity is not widely practiced, Christmas is still celebrated. We all know that Santa Claus is “gonna find out who’s naughty and nice”, but what happens to the naughty kids during the Christmas season? For some, naughty kids simply get coal in their stockings. But children in Germany and Austria fear the coming of Krampus, who will chase them around and punish them – or maybe even abduct them! The legend of Krampus is an integral part of the celebrations surrounding the feast of Saint Nicholas, occurring this year on Monday, December 6th.

Who (or What) is Krampus?

A typical depiction of Krampus is the stuff of nightmares. He is described as something akin to the ancient Greek satyr – half man, half goat – often depicted with dark hair, fangs, and a long tongue. The legend of Krampus originates from earlier pagan winter solstice traditions that were merged with Christian traditions in much the same way as other holidays such as Halloween or Easter. Many European countries have a tradition of an evil equivalent to Santa Claus, though Krampus is the one most familiar to Americans as the tradition has seeped into our popular culture.

According to folktales told in the Germanic area of Europe, Krampus comes to towns on the night before Saint Nicholas Day – the night of December 5th this year. Typically, children leave their shoes out on their home’s front porch on this night, because on St. Nicholas Day they would wake up to find sweets and other treats in their shoes if they were good. The legends said that, during the night, Krampus would come and swat wicked children with his birch sticks, put them in his sack, and abduct them to his lair in the underworld. Nice children would wake up the next morning to find sweets in their shoes, and while the truly wicked would disappear, naughty children would have a rod in their shoes, serving as a warning to shape up, or they would be next.

Another tradition associated with Krampus is that of the Krampuslauf, or Krampus Run, which was another way to scare Austrian children into behaving. In this tradition, grown men would get drunk, dress up as Krampus, and wildly run through the streets of their town. Many think of it as a way for adults to blow off some steam in a manner that might not have looked that out of place to an ancient pagan, while still pushing the legend of Krampus to impressionable children.

Categories: Austria and Germany | Tags: austria, christmas, germany, and krampus
This entry was posted on Wednesday, December 1st, 2021 at 10:30 am . You can follow any responses to this entry through the RSS 2.0 feed. Both comments and pings are currently closed.