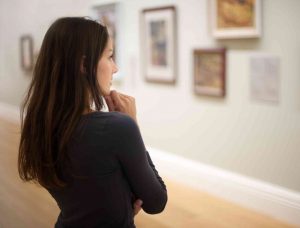 Picasso first visited Paris in 1900, when he was just 19 years old. During this time, Paris was the art capital of the world, and Picasso became friends with many other artists as he explored the culture and history of the city. Picasso was torn between the comfort of Spain and the excitement of Paris, and he struggled to secure his place in the art world, his finances, and his identity.

You can view Picasso’s paintings in museums throughout the world, but only one has been recently updated and currently owns more than 400 of the artist’s works. Take a tour of The Musée Picasso, in the Marais district of Paris, and witness the world’s largest Picasso collection.

Picasso was a well-known collector who could have easily been described in today’s society as a “hoarder” of art. He saved all of his works, from unfinished pieces dating back to his youth to notes he had written on scraps of paper. He left this accumulation of work to family members when he passed in 1973. They would later gift it to the French government, and it is on this sentimental pile of Picasso’s madness that the Musée Picasso would be built on.

The museum’s collection not only invites viewers to observe the incredible amount of the artist’s works, but it shares insight into the artist’s mind. Mixed through the pieces of Picasso’s personal and unfinished work are works completed by artists that Picasso loved and was inspired by.

The museum was built between 1656 and 1659, for a tax farmer who became rich collecting the salt tax or gabelle. It’s considered one of the finest historic houses in the Marais, and deserves a visit if not for the artwork, for the impressive architecture

More than 5,000 works were donated by Picasso’s family after his death and since 1986, more than 1,000 exhibits have been bought by the museum.

Categories: France | Tags: Pablo Picasso, paris, and Picasso Museum
This entry was posted on Wednesday, May 3rd, 2017 at 12:03 pm . You can follow any responses to this entry through the RSS 2.0 feed. Both comments and pings are currently closed.