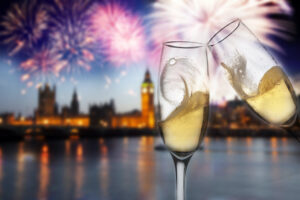 During your New Year’s celebrations, it’s likely that you toasted at midnight with a glass of champagne.

From all of us at AESU, we wish you and your family a happy and safe New Year! We hope that your travel schedules are full and as stress-free as possible in the upcoming year. During your New Year’s celebrations, it’s likely that you toasted at midnight with a glass of champagne. Champagne has always been associated with glitz and glamor since its invention at the end of the Middle Ages. Let’s take a deeper dive into the history of Champagne!

Wine-making in France as a whole dates all the way back to the Gallic period in the first century BCE and beyond. The Gauls in the Champagne region, for the most part, were said to be allied with Caesar during his Gallic wars, and their love of wine was noted by him in his commentaries on the war. After integration with Rome, and after the fall of the Empire, this love did not dissipate. Institutions of the Catholic Church, such as monasteries, took up the production of wine and innovation was very dynamic during the so-called Dark Ages.

The Beginning of the Champagne Method

By the mid-1600s, the Champagne region was beginning to develop a distinct method of production separate from other wine-making regions in France. Dom Pierre Pérignon, a Benedictine monk, began to blend different wines and crus in a thought-out way. This created a whole that was greater than the sum of its parts – the blended wines were more balanced and of a higher quality. At the end of the 17th century, Champagne’s wine producers invented and used a new grape-pressing technique that was gentler on the grapes – this not only resulted in better quality, but also allowed for white wines to be made from black grapes for the first time.

Sparkling wines, up to this point, were created purely out of chance, as external conditions determined whether the wine would have effervescence or not. Bottles were not up to the task of containing the carbon dioxide generated within and would explode – and those that survived would only have the sparkle for a brief period. This all changed with two big developments in the 17th and 18th centuries. First, the cork stopper was invented, allowing for the bubbly drink to stay bubbly while in storage. Second, bottles were created with much thicker glass than they had been before, allowing them to survive the pressure created from the carbon dioxide build-up within. Together, they created the Champagne sparkling wine we know and love today. The consumption of champagne within royal and upper class circles in France contributed to its association with luxury that it still enjoys to this day!

Categories: Travel Tips | Tags: 2023, Champagne, and champagne history
This entry was posted on Wednesday, January 4th, 2023 at 11:38 am . You can follow any responses to this entry through the RSS 2.0 feed. Both comments and pings are currently closed.