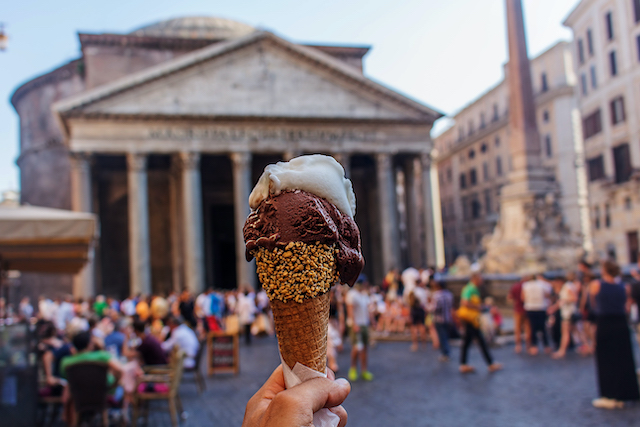 In 1880, Rome’s oldest and arguably most famed gelateria opened its doors for the first time.

Gelato is wholly Italian in its origins. The tasty dessert, in the form we know it today, was invented by Italian chef Francesco Procopio dei Coletti in Paris in the late 1600s. This effort earned him French citizenship and an exclusive license from the king of France to sell gelato, making him the only seller in the entire kingdom. Back in the motherland, gelato became accessible to the general public by the mid eighteenth century. And in 1880, Rome’s oldest and arguably most famed gelateria opened its doors for the first time. Visiting the Palazzo del Freddo di Giovanni Fassi and having some of their famed gelato is absolutely a must when visiting the Eternal City!

The Royal Origins of Fassi

Giovanni Fassi, the namesake of the gelateria, was born in 1880. His father Giacomo had just opened his small shop the same year, and initially the Fassi shop was in the business of selling ice and beer, although they also experimented with selling sorbet. Giovanni helped out around the shop as a kid, and in 1900 became an apprentice pastry chef and ice cream maker for the royal house of the king of Italy. He trained for two years at the royal house, but decided to resign after a court order banned beards and mustaches amongst royal kitchen staff (Giovanni was too proud of his mustache to shave it). Upon returning to the family business, they picked up and moved to Piazza Navona opening a pastry and ice cream shop to put Giovanni’s training to work.

Giovanni was forward-thinking, adopting new technology and inventing new methods of consuming his delicious gelato. When electricity first began to spread, he acquired some of the first electric cooler machines manufactured in Germany. His wife, Giuseppina, was integral to the success of the business and is credited as one of the first successful female entrepreneurs in Rome. And the Fassi family seemingly invented ice cream on a stick with the Ninetto – named after Giovanni’s nickname among friends.

Since the early 1900s, the Fassi name has grown in prominence around the world. Giovanni passed away in 1977 at the age of 97, while his wife Giuseppina passed five years later. The Fassi family continued to run and promote the business through Giovanni’s son Leonida, then his sons Giovanni, Daniela, and Fabrizio. The Fassi name has even been used for franchising to take their genuine Italian gelato around the world – you can now even find Fassi gelato in Korea and China! But there is something magical about eating it in the place where it all began over a hundred years ago.

Categories: Italy | Tags: gelateria, italy, and rome
This entry was posted on Wednesday, April 20th, 2022 at 12:02 pm . You can follow any responses to this entry through the RSS 2.0 feed. Both comments and pings are currently closed.